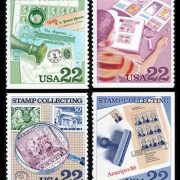 It’s surprising just how often the question, “What is Stamp Collecting?” is asked.  This seems to request a more thorough answer than the obvious.  Of course, stamp collecting is the act of collecting stamps.  (Remember the last time you got away with giving a definition like that…2nd grade, maybe?)  Often, it seems, that the real question is related to the difference between stamp collecting and philately.  More often, however, I believe the question is really about how a collector goes about their hobby.  The fact that the question is asked at all implies that this hobby differs greatly from others.  I’ve never heard, “What is Kite Flying?”, for example.

What makes stamp collecting so unique from other hobbies?

The terms Stamp Collecting and Philately are often used interchangeably in modern use.  Mary H. Lawson of the National Postal Museum defined philately as “the study and collection of stamps”.  Others have differentiated among the two terms further by describing philately as more of a science.  That science is studying stamp collectors and the hobby itself while not necessarily participating in it.  Hmmm.  That sounds like it could be summarized as the hobby of studying the hobby.  Nevertheless, Stamp Collecting must be a pretty unique hobby to have a separate word to define its study!  What makes it so unique?

…a hobby with an astronomical variety of collectibles

For one, it would be realistically impossible to collect one of every single stamp ever to exist.  Even it it were possible, what about all the different postmarks of used stamps, the differences in centering, or conditions?  Ok, so stamp collecting is a hobby with an astronomical variety of collectibles.  But that’s not what makes it really unique.  After all, a person could collect grains of sand I suppose.  The real reason why it is such a unique hobby is the number ways a person can categorize stamps and the order in which they do so.

Many a beginning stamp collector will start with a set of stamps from a particular country or those of a specific theme.  But their journey and their eventual collection will be uniquely patterned by those stamps which pique their continually evolving interests.   A Stamps on Approval customer may ask to examine and consider the purchase of stamps from Canada and those depicting mushrooms.  Their interest in Canada may lead to hockey stamps.  That leads to Olympics stamps, which leads to Great Britain, WWII…royalty, and eventually first day covers from Great Britain.  The possibilities are endless.

Stamp Collecting is the journey one takes between his or her very first stamp and their last!

The otherwise obvious definition of stamp collecting doesn’t work.  So, just what is stamp collecting?  Stamp Collecting is the journey one takes between his or her very first stamp and their last!  In this way, every stamp collection is 100% unique.  And that is why the hobby can only be truly defined by the collector themselves.

What is a Stamp Packet

Please Note:
Tell us About Your Stamp Collection
Scroll to top